Black Power Blueprint is a joint program of the African People’s Education and Defense Fund (APEDF) and Black Star Industries (BSI), transforming North St. Louis through renovation, economic development and political power by and for the black community.

Economic power to transform the future!

Led by Ona Zené Yeshitela, President of the African People’s Education and Defense Fund (APEDF) and Black Star Industries (BSI), the Black Power Blueprint was launched in 2017 on the North Side of St. Louis, the most impoverished area of the city.

The Black Power Blueprint is buying abandoned, dilapidated buildings, initiating a rapid process of restoration or demolition and re-allocation of land to create community-generated, self-reliance programs that uplift the residents and engage them socially, politically and economically in the future of our community.

In three years APEDF and BSI have raised more than $300,000 in funds primarily from crowd-funding, webinars, Uhuru Pies and Uhuru Furniture sales, countless donors and in-kind services and contributions.

This outpouring of support has enabled the Black Power Blueprint to transform a community—not just with land and buildings, but with a sense of pride and a vision for a prosperous future once again. 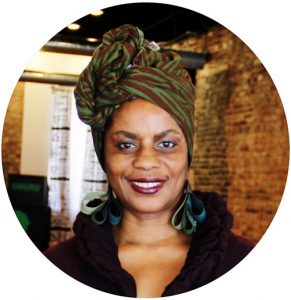 You can join the thousands of supporters, contractors, skilled workers and volunteers in contributing through this dynamic project that is literally transforming the terrain of the North Side of St. Louis.

Donors to the Black Power Blueprint are supporting African self-determination. Some donors give out of a commitment to reparations, righting a historic wrong.

Thank you so much for contributing to self-reliance, genuine economic development and political engagement in the hands of the African working class!